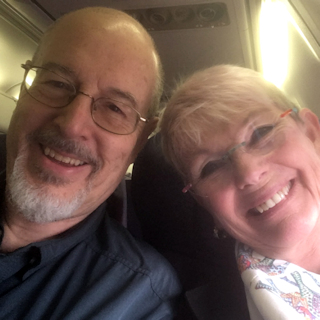 Q. Who is Stephen Cobb?
A. Stephen is an award-winning technologist and best-selling author with over 30 years experience as computer security professional. His LinkedIn page is here.

Q. Why did Stephen create this site?
A. Stephen's wife, Chey Cobb, also a writer and computer security expert, has hemochromatosis. Stephen wanted to spread the word about hemochromatosis to help other families avoid the tragic consequences of undiagnosed iron overloading. Chey sometimes helps with research for blog posts and replying to comments.

Q. When did Chey start experiencing the symptoms of hemochromatosis?
A. Around the time she turned 40.

Q. When did Chey find out she had hemochromatosis?
A. November of 2008, more than 10 years after the first indications of iron loading. Stephen wrote about the diagnosis in this article: What Am I Thankful For? A diagnosis of hemochromatosis

Q. Is either Stephen or Chey a medical doctor?
A. No. But given the terrible track record of doctors when it comes to diagnosing and treating hemochromatosis, documented here and in other places, Stephen and Chey probably know more about hemochromatosis than the average family doctor.

Popular posts from this blog

A note from Stephen Cobb who launched the CelticCurse.org website in July of 2010 with this headline:  The Work Begins Here: Teaching the world about the Celtic Curse. I began that first article with this statement: "The more people know about hemochromatosis, a genetic condition often referred to as Celtic Curse, the fewer will suffer needlessly and die tragically." That statement remains true today, more than 10 years after I wrote it. The effort to fight hereditary hemochromatosis by informing people about this surprising common genetic mutation—and the potentially fatal condition of iron overload that it can create—needs to continue in 2021.  Thankfully, over the last decade a growing number organizations and online efforts have appeared and expanded to reach more and more people. Here are just a few of them, from around the world: Hemochromatosis.org Iron Disorders Institute Haemochromatosis UK The Irish Haemochromatosis Association American Hemochromatosis Society Canad
Read more

Ernest Hemingway, one of America's greatest writers, died from hereditary hemochromatosis on July 2, 1961. He was one of a number of Hemingways who succumbed to America's most prevalent genetic killer, a condition that is remarkably cheap and easy to treat, and may do very little damage if detected early enough. If you're like me, you were taught in school that Hemingway died of a self-inflicted gunshot wound. However, it is clear to many that the underlying cause of his death was iron overload due to hereditary hemochromatosis or HHC, also known as bronze diabetes and Celtic Curse. Why? Hemingway suffered from classic iron overload issues, like liver problems, heart disease, diabetes. Depression and suicide are both associated with hemochromatosis (numerous people on his family tree committed suicide). [The first version of this article was written by Stephen Cobb in 2011. It was revised in 2016 and refreshed more recently to mark World Haemochromatosis Week 2020 , J
Read more

This website is about hereditary hemochromatosis, also called genetic haemochromatosis—and in olden times bronze diabetes. This condition can cause iron overload which damages joints, liver and other organs. It can disable or even be fatal if not diagnosed promptly (creating an issue for menopausal women called hemopause).
Hemochromatosis is not as rare as many doctors say. The term Celtic Curse comes from Ireland, where 1 in 83 people carry the gene. The Iron Disorders Institute says it affects over one million Americans. But iron overload is relatively cheap and easy to treat. It may do very little damage IF detected early enough.