A note from Stephen Cobb who launched the CelticCurse.org website in July of 2010 with this headline:

The Work Begins Here: Teaching the world about the Celtic Curse.

I began that first article with this statement: "The more people know about hemochromatosis, a genetic condition often referred to as Celtic Curse, the fewer will suffer needlessly and die tragically."

That statement remains true today, more than 10 years after I wrote it. The effort to fight hereditary hemochromatosis by informing people about this surprising common genetic mutation—and the potentially fatal condition of iron overload that it can create—needs to continue in 2021.

Thankfully, over the last decade a growing number organizations and online efforts have appeared and expanded to reach more and more people. Here are just a few of them, from around the world:

Over the last 10 years I managed to publish about 50 articles here on this site, covering the symptoms,  treatment, and implications of hereditary hemochromatosis, in general and for some specific demographics. That was fewer articles than I had originally hoped to write, but life—including some of the effects of my partner's iron overload—got in the way.

Fortunately, I was able to supplement my awareness-raising efforts on this website with a Facebook page. That page has achieved nearly 10,000 "likes" so far. Information posted there reaches hundreds of people every month, sometimes thousands. Hopefully, these combined effort have led to more people getting diagnosed earlier and treated better.

There's so much more to be done

Sadly, one statement that I made in that first article, back in 2010, has not proven entirely correct. At that point in time I had been researching hemochromatosis for about a year and a half, reading books and journal articles, attending several conferences, and talking to lots of people. Based on that, it seemed reasonable to say:

"The only real obstacle to universal detection, treatment, and elimination of this potentially deadly condition is a lack of information among doctors and among the general population."

But since then I have learned that there are other serious obstacles to reducing the tragic impact of hemochromatosis; most notable are these two:

Unfortunately, these two factors often interact. For example, patriarchal doctors tend to under-diagnose hemochromatosis in women. This tends to diminish the impact of the condition, making it less visible to researchers and the people who fund them.

Over the years I have tried to address this particular problem, notably by raising awareness of what I call hemopause, a syndrome that I first identified back in 2012; it afflicts women entering menopause with undiagnosed hereditary hemochromatosis. Last year I made a website to address hemopause specifically.

The negative impact of pharmaceutical companies is their tendency to draw funding away for research into, and diagnosis of, hemochromatosis. Drug companies make most of their money by selling products that treat symptoms or their causes; that's what drives and directs their spending on medical research. The cause of hemochromatosis symptoms is iron overload, for which a cheap and effective treatment already exists: drawing blood. In other words, many other illnesses offer more fertile ground for research into readily monetizable treatments than does hemochromatosis.

Removing blood—phlebotomy—is one of the least expensive and most widely available medical procedures in the world. We often call the process giving blood, because blood is valuable. Blood from hemochromatosis patients can be used like any other blood, and in fact may be even more valuable than regular blood. That is not good news for drug companies if they are only interested in funding research into conditions for which a treatment can developed, and then sold to people suffering from those conditions.

I apologize if this sounds cynical, but my goal is to be realistic. For example, here is a realistic scenario: a drug company develops a pill to treat the iron overload caused by hemochromatosis. Studies shows it to be more effective than phlebotomy. FDA approval is granted for use in the USA. There are millions of potential customers in America, but many of them don't know they need this pill. What does the drug company do?

If you've spent time in America in the last few decades, you already know the answer: massive ad campaigns that use the tried and test "ask your doctor about X" strategy. Nobody would be surprised to see an ad like this one for Ferritrol, a pill-based daily hemochromatosis treatment [that is fictional]. 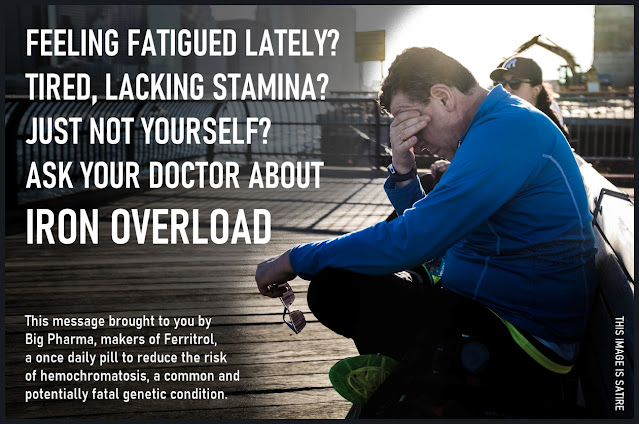 In other words, if there were pills you could sell to treat hemochromatosis, the makers of those pills would raise hemochromatosis awareness faster and higher than volunteers and non-profit organizations ever could. That would probably result in more widespread genetic testing for the HFE mutation that signals susceptibility to iron overload, which is something that the fight against hemochromatosis desperately needs.

The good news in 2021 is that, unless or until such a pill is developed, iron overload can be safely and effectively treated by drawing blood, which is a free service in many countries. The problem is that too many people with the genetic disposition to accumulate iron are unaware they have it, and not enough is being done to identify those people.

What can we do?

We can reduce suffering and save lives by continuing to spread awareness of hemochromatosis. This is still a very viable strategy, and you can do a lot of awareness raising for very little cost. Here are 10 things you might want to try:
I thank you for reading this page and for your interest in hemochromatosis. I will try my best to keep this website growing in 2021.
bronze diabetes Celtic Curse haemochromatosis hemochromatosis hemopause iron overload menopause

Popular posts from this blog

Ernest Hemingway, one of America's greatest writers, died from hereditary hemochromatosis on July 2, 1961. He was one of a number of Hemingways who succumbed to America's most prevalent genetic killer, a condition that is remarkably cheap and easy to treat, and may do very little damage if detected early enough. If you're like me, you were taught in school that Hemingway died of a self-inflicted gunshot wound. However, it is clear to many that the underlying cause of his death was iron overload due to hereditary hemochromatosis or HHC, also known as bronze diabetes and Celtic Curse. Why? Hemingway suffered from classic iron overload issues, like liver problems, heart disease, diabetes. Depression and suicide are both associated with hemochromatosis (numerous people on his family tree committed suicide). [The first version of this article was written by Stephen Cobb in 2011. It was revised in 2016 and refreshed more recently to mark World Haemochromatosis Week 2020 , J
Read more

This website is about hereditary hemochromatosis, also called genetic haemochromatosis—and in olden times bronze diabetes. This condition can cause iron overload which damages joints, liver and other organs. It can disable or even be fatal if not diagnosed promptly (creating an issue for menopausal women called hemopause).
Hemochromatosis is not as rare as many doctors say. The term Celtic Curse comes from Ireland, where 1 in 83 people carry the gene. The Iron Disorders Institute says it affects over one million Americans. But iron overload is relatively cheap and easy to treat. It may do very little damage IF detected early enough.